Bitcoin: Invest if You Want to Get Bit!

There are universal truths, such as where there is gravity, what goes up must come down. It’s a universal truth in Economics that price is a function of supply and demand. Sometimes demand vastly outstrips supply which causes a rapid escalation in price. But rapid increase in price because of rapid escalation of demand is not a good investment thesis, and usually it’s a disaster. Almost always, when something has such great demand, substitute products siphon off demand and prices fall.  Bitcoin could be the very next to suffer this fate.

Bitcoin is a cryptocurrency.  You can learn some basics about Bitcoin here. It is a monetary unit that is like the US Dollar or Chinese Yuan and is traded on exchange websites. However, since it has a sophisticated algorithm associated with it, it cannot, it is said, be counterfeited. This is in part why demand for Bitcoin is rising. Some believe that cryptocurrencies, and specifically Bitcoin, will be the ‘currency’ of future economies.

Bitcoin, however, is not the only cryptocurrency and as its price becomes unreachable, new or existing electronic currencies will supplant Bitcoin.

As evidence of the rush to monetize the interest in Bitcoin, there are now several unregulated initial coin offerings (ICO). Over $2 billion was raised in ICOs in the first nine months of 2017. Jordan Belfort, the subject of The Wolf of Wall Street, calls these initial coin offerings the biggest scam ever1. Imagine that!

Rapid escalations in price have been the hallmark of many famous manias, including tulip prices in the 16th century, Dot.com stocks, the US housing market of the 2000s, even Tickle Me Elmos. See the image below for a few of famous investing manias. 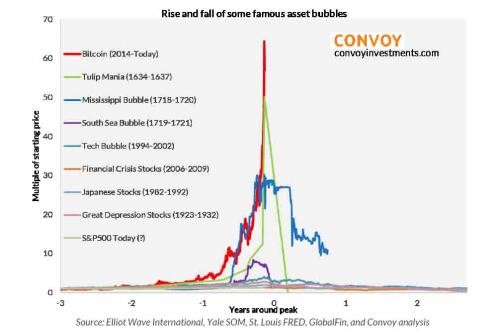 Manias are a bit like Ponzi schemes. Is there money to be made? Sure, but you have to be at the front end of a scheme or mania. Ponzi schemes work because the early participants are getting payouts and spread the word about their high rate of return, creating demand from others. The demand will outstrip the funds available and the scheme will collapse from the weight.

Every mania has an economic ‘thesis’ behind it.  Sometimes a reason why this time is different is offered, such as the Dot.com stock boom of 1999. The thesis around investing in Bitcoin is also ‘this time it’s different’. No investing thesis supports the astronomical price increases seen in the investments seen in the chart.

There are structural problems with Bitcoin as well.  It is unregulated and traded on unregulated exchanges. Some of the exchanges have closed or declared bankruptcy, leaving investors in the learch.  In 2013, a Chinese exchange shut down unexpectedly and subscribers lost $5 million in Bitcoin. The creator of the cryptographic algorithm is unknown.  Substitute cryptocurrencies exist and others are being developed.  Finally, and most troubling, Bitcoin is also being used for illegal activities, such as payment form for malware attacks.  Since Bitcoin transactions can’t be reversed, it is a preferred vehicle for illegal activities such as scams and frauds.

So for all these reasons, it is prudent to stay away from Bitcoin.  If you would like more information explore some of the articles below:

FirstWave Financial can help you stay in the know regarding every move in the financial world. For more, please call our wealth services firm in Satellite Beach, FL – Melbourne/Brevard area at (321)773-7773 to schedule a complimentary consultation or visit us at www.firstwavefinancial.com.

You should not assume that any discussion or information contained in this publication serves as the receipt of, or as a substitute for, personalized investment advice from FirstWave Financial. A copy of the FirstWave’s current written disclosure statement discussing our advisory services and fees is available upon request.